Here is our next article in our series on comparing different roleplaying systems and rule sets with one another. We had a look at D&D 5th Edition and GURPS 4th Edition and now it’s time to travel back in time to another one of the really old (but awesome!) roleplaying rulesets: Middle Earth Roleplaying or, short, MERP. In particular, we will have a look at the second edition of the game. 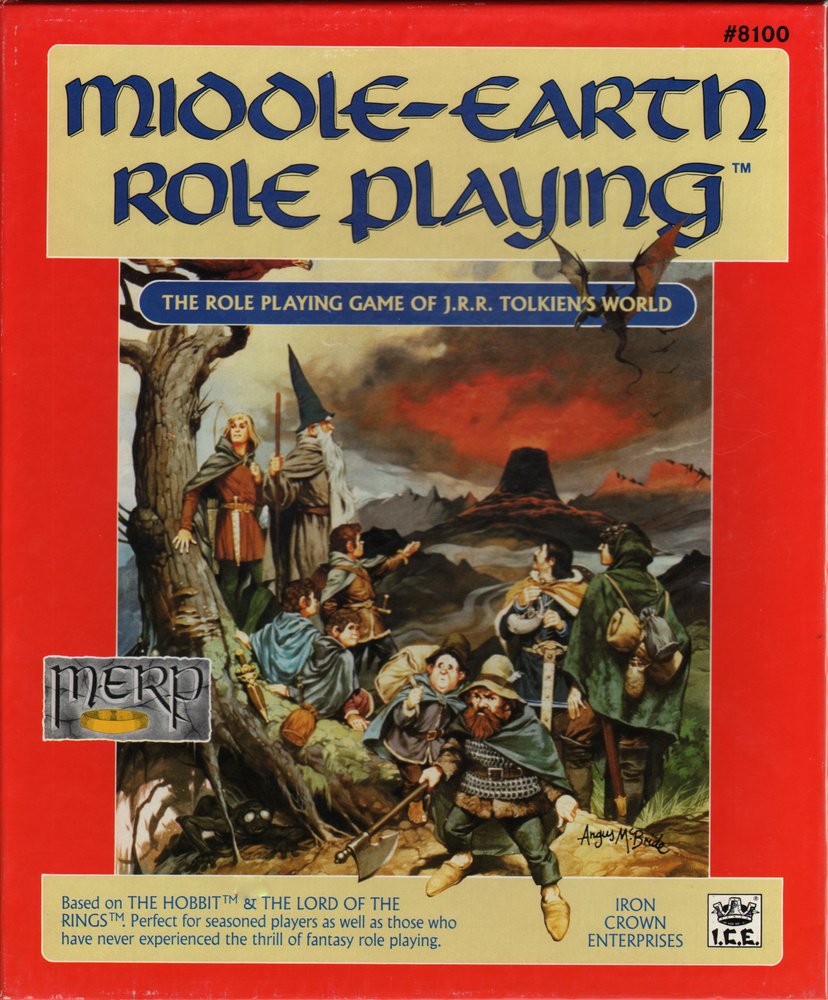 MERP, to me, will always have a very special place in my heart (which is why it kind of found its way on here). When I was still a teenager my best friend’s older brother had the rulebook, and he played with his buddies. For a few years I was just aware that they played some kind of game where everyone sat around a table and shuffled pieces of paper, looked things up in tables and made notes. If there wouldn’t have been dice in there, I would have thought there was a group of people there who had the time of their life doing some accounting.

Only once I started to read “The Lord of the Rings” were my eyes opened to this strange new world… and at some point my friend’s older brother invited us to play a game with them. I can’t really recall any details regarding character creation anymore, but I still remember that once scene in the game we played as if I was there myself.

Our group of adventurers, I think two elven rangers and a human warrior, had climbed a hill after sunset and saw a pair of trolls on the road below. As far as I recall we spent most of the time talking about how to best attack them but to me the whole thing is so vivid and alive that I could not differentiate it from any “real” memories I’ve had. After that evening playing the game I was truly hooked. I couldn’t stop thinking about the adventures we played through and couldn’t stop myself drifting into a land of orcs and elves whenever I went through a forest.

Well, let’s speak about how MERP works: Like D&D MERP uses a single roll to determine if an attack was successful. But, unlike D&D, MERP takes it a step further and also tells you how much damage your attack caused with that same roll! As you might imagine, a d20 isn’t really giving you a lot of options there, so MERP (and it’s bigger brother Rolemaster) use a d100 – usually represented by two 10-sided dice.

Also, other than D&D, MERP uses “open-ended” rolls. That means if you roll a 96 or higher, you roll a second time and add the two rolls together. If the second roll is again 96 or higher, you continue on doing the same thing. You can get incredibly rare but extremely powerful rolls this way. Open-ended also works in the other direction – if your roll is below 06 you roll again and subtract that new result from the initial one. Repeat as long as necessary.

To then determine how your attack did against an enemy, you apply positive (attack bonus, weapon quality etc.) and negative (defense bonus etc.) modifiers to the number and then look things up on a table to see what you go. The table has two parts, one is the weapon you are using (for example a cutting or as they call it here “slashing” weapon like a sword) and the other which armor the opponent has. 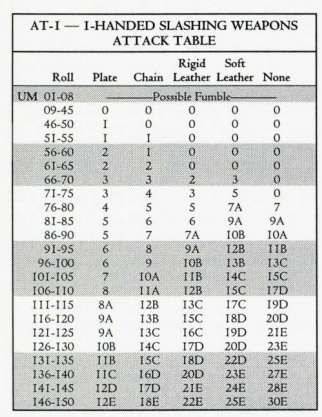 As you can see on this table (we’ll use this for our broadsword) the higher you roll the larger the numbers get and the higher the letters. The numbers are how many points of damage you make in your attack (subtract from HP like in D&D) but, more importantly, the letters tell you that you made a critical hit in addition to just damage. And there are different levels of critical hits here. A is the weakest, E is the strongest and most deadly.

So in your case, if we achieved a total of, say, 90 on our roll and our opponent has no armor, that means we caused 10 points of damage and a critical hit of severity “A”.

We would then roll on a second critical hit table and look up the (often gruesome) result of that critical hit. This could be anything from some additional damage to bleeding to severing an arm or chopping off a leg. In short: if you play MERP a sword actually feels like it can cause some real hurt (and doesn’t just change a number total on your character sheet).

As before, we will start to construct a character that will look like a human fighter. But since, in the world of Middle Earth, each variant of human has their own little quirks and abilities, we will go with the most iconic of them all: Dúnedain. Aragorn’s people, essentially. Then we will follow the same principles as before… a level 1 warrior (the equivalent of a fighter in D&D), add broadsword and a shield and throw as many points into combat relevant abilities as possible.

We have 3 special background ability points (due to picking the Dúnedain race) and we’ll use them to give us another +5 to use edged weapons (our sword), lightning reactions (another +5 and +5 to our defense) and, to finish it off, “resistant to pain” (which will boost our hp a bit).

OK so here is our (again boiled down to only combat stats) character, Merpor the Mighty:

The most important values here are how good we are with 1-Handed Edged weapons (aka our broadsword).. +48 (which is excellent) and how well we can defend ourselves .. a +30 defense bonus (DB). Not too bad at all.

Time to face himself in the guise of Carbonius again!

We’ll have to make one tiny decision up front, and that’s initiative. Normally, the fighter with higher scores in Movement and Maneuver (similar to Move in D&D) begins and if there is a tie they both attack at the same time. In a real game of MERP that would be incredibly rare (about 1 in 100) and having both Merpor and Carbonius hack at each other in sync is, well, kind of weird.

So we will make a GM (game master) decision here and say that Merpor starts.

Every fighter has the option of using part of his attack bonus to add to his or her defense. So while Merpor has a defense bonus of +30, he could add some of his broadsword skill to aid in his defense. He will stay fairly offensive, hoping to end the combat quickly, and just adds 8 to his defense and subtracts it from his attack for this round.

Merpor rolls the dice: 46. He adds his remaining attack bonus of +40 and subtracts Carbonius’ defense bonus of 30. 46+40-30 = 56 total. Looking up the column called “none” (no armor) in the attack table above shows us that Merpor didn’t hit (or cause any damage).

Now it’s Carbonius‘ turn. He decides not to move any of his offensive bonus to help his defense, likely feeling confident due to Merpor’s failed attack. He attacks and rolls 83.

Carbonius gets to roll on the ‘Slash Critical Hit’ table. A critical of class “B” will reduce his roll a bit (-10) because it’s a weak critical hit (remember these go all the way up to “E”). He rolls a 98!! This could end quickly. Given that this roll is also open-ended and above 96 Carbonius gets to roll again to add to this result before any modifiers are applied. His second roll is a 19.

His total is therefore 98+19-10 = 107. Knowing the result will probably be gruesome, he looks up his result in the Slash Critical Hit table and gets:

He chopped off Merpor’s weapon arm! Oh my. That was over quickly. Merpor falls to the ground unconscious and Carbonius wins Obi Wan Kenobi style.

Would Merpor have worn a chain mail, he would have gotten away with just 8 points of damage and no critical (you can check the table up there again in the chain mail column). Oh my, that would have been a life-saving investment right there!

Now it’s fair to say that not all MERP combat is actually that short – Carbonius was really lucky here (or Merpor really unlucky) – but hopefully you got the flavour of how it works, regardless.