What else is out there? Well, one system that’s also incredibly popular and, again, quite different from the others is Vampire the Masquerade. Vampire came about around 1991 for the first time and presented a bit of contrast to the more high-fantasy oriented D&D games. It is also more targeted towards an adult audience because it deals with somewhat darker themes. 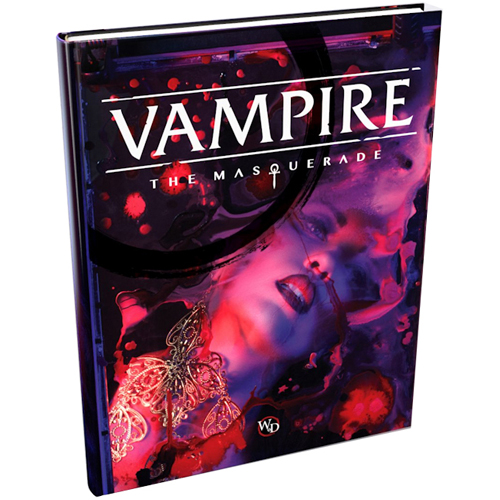 The world in which Vampire takes place is typically a modern one. It’s a present day setting, at least in the current edition, but the world it represents is much more sinister. If you have seen any of the Underworld movies, you’ll get a good idea. Overall, the system has a strong focus on narration and immersion over combat and loot. This also means that the combat rules are a lot less complex than in many other systems – they are mostly tuned towards allowing the story to happen without rules getting in the way too much.

There have been several versions of Vampire or other products using the vampire rule-set and world over the years. Some playing in the middle ages and Victorian times, some focusing on vampires, mages or changelings and a reboot of the original world. In terms of presentation, the Vampire books are some of the most aesthetic roleplaying products I have seen yet. The art is gorgeous.

So how does it all work? Vampire uses dice pools of d10s to do most of the die rolling tasks. 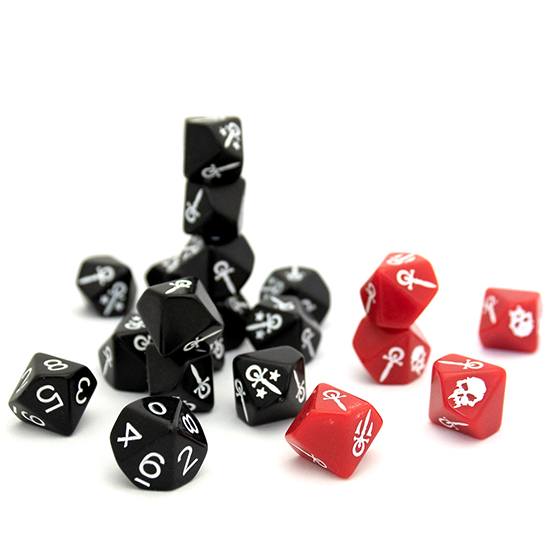 Since the dice basically only have three relevant outcomes: failure, success, and “potential critical success” (aka a 0 rolled), Vampire has its own dice sets you can buy that have no numbers but rather symbols on them. Not really necessary to play, but makes some things more intuitive (you’ll see some of those dice in the picture above). We won’t be using those special dice here in this example, though.

Dice are usually rolled either against a target number of successes required (for instance if you are trying to hit an object) or against another pool of dice (if the opponent can oppose you action, i.e. an attack) to determine a difference in successes.

A typical roll like, say, an attack comprises two pools of dice normally. This is often an ability score type dice pool (like Dexterity) added to a Skill type dice pool (like Melee Weapons). So an attack with a sword would mean you roll several dice equal to your Dexterity and Melee Weapons dice added together. The opponent does the same and the difference results in damage taken the looser of the contest. Difference here again refers to “successes” not actual numbers rolled. Once the difference has been determined, you add the specific damage bonus depending on weapon type. A broadsword has a +3 damage bonus.

Since Vampire the Masquerade is a modern-day game, it doesn’t really have very clear-cut rules on people using shields, but older versions use a system that makes a dice roll more difficult by subtracting successes from a roll. In our case, we will subtract 2 successes to simulate a small shield.

Vampire is really built as a story-heavy game without too many rules that would get in the way. Therefore, the character creation is also fairly minimalist and heavily geared towards smooth gameplay. Typically, in a game of Vampire you will play .. well.. a Vampire (didn’t see that one coming, eh?). Since, for our purposes here, we don’t really want to deal with supernatural powers and special abilities (which a Vampire would, no doubt, use), we will build a mortal (“human fighter”) instead.

Our character will again be fairly close to the D&D equivalent we had in our very first article. Here he is:

The dots here show the number of dice, so for Dexterity we would have a dice pool of 3 dice. The Hit points are just number of Stamina dice +3, so very easy to derive. It’s fair to say that with only 6 hit points and a damage bonus of +3 the combat won’t last a very long time as soon as someone hits!

Like the biblical brothers Abel and Cain, as before, our brave warrior faces off against a carbon copy of himself with the exact same stats. The mighty Carbonius.

We will assign initiative to Mas, but you’ll see that it actually doesn’t matter because the contest is two-sided anyway and each roll can cause damage in either direction.

Mas rolls adds his dice pool for Dexterity and Melee Weapons to use as hit attack skill. That’s a total of 6 dice to be rolled. He goes for it: 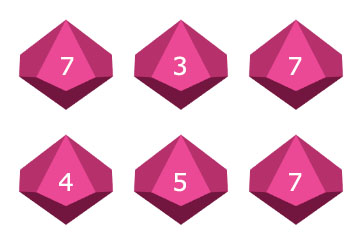 That’s 3 successes right there (7, 7 and 7 again..) will it be lucky 7s ? We subtract two because Carbonius has a shield and arrive at 1 success. Now Carbonius rolls for his attack (same number of dice of course): 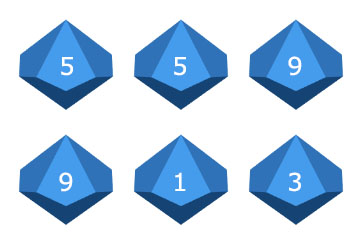 That’s 2 successes only (the two 9s). Since Mas also has a shield he reaches a total of 0 successes.

Mas therefore made a successful attack against Carbonius (1 success against 0) and can now add the damage bonus from his broadsword (+3) for a total of 4 points of damage. That will hurt!

Spurred on by his recent successful attack, Mas lunges forward and strikes again at the severely wounded opponent. 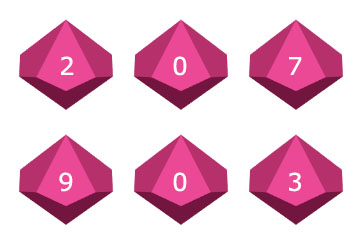 Wow! We rolled a critical right there (the two 0s). In addition to the two successes by the 7 and the 9 this makes a total of 1+1+4 = 6 successes. Very strong attack. We subtract 2 for the shield again and arrive at 4 successes for Mas.

Carbonius desperately tries to defend and counter – but will it be enough to avert Mas‘ brilliant attack? 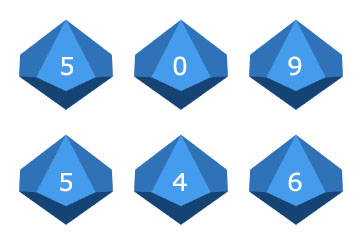 He rolled three successes here (0, 9, 6). Minus 2 for the shield gives us 1 success. Carbonius would have needed that one last round! Mas‘ blade slips through his defense effortlessly and causes a total of (4-1+3) 6 points of damage (!). Carbonius is out of the fight and drops to the ground. The combat is over and Mas is the victor.

As you can see, combat in Vampire is very simple and really quick to resolve. In a less artificial, more realistic scenario, the game master/story teller/dungeon master would provide many of the aspects that are not covered by rules by judgement calls. The system is therefore well suited for players who enjoy a game where combat isn’t necessarily a major component of a typical gaming session. While the rules cover enough aspects to provide a guideline for how fights could be handled, there is a lot less granularity with, for instance, different weapons and their effects. Similarly, all Melee Weapons and all Ranged Weapons have a single skill that they all use. So if your character is great at using a knife, for instance, he will also be equally great at using a two-handed sword.

Again, this puts the emphasis on abstraction. From a storytelling perspective or a non-realistic, more movie-like angle, this is perfectly fine. After all, in most movies (or books) a knife is dealt as being an even more deadly weapon than a sword sometimes. If you could go through all movies you’ve seen or all books you’ve read: how many times does someone get killed by a single knife attack versus a single blow with a sword.. see what I mean?