Creating a character portrait for free

We’ve all been there… you made a shiny new character, came up with a cool backstory, filled out the attributes and skills on the character sheet, jotted down the equipment on page two… and suddenly you are staring at that blank space with the words “character appearance” underneath.

Not a space with some lines where a little bit of text might save your bacon… a large portrait-style window of white that demands a picture.

You get flashbacks from that time, many years ago, where you thought that drawing is your thing. You scribbled on every surface that presented itself and, naturally, also drew your first character portrait with a ballpoint pen.

Proudly you presented your character to the gaming group at the next session, hoping for admiration and favorable comparison to Larry Elmore, Clyde Caldwell or Stan Lee. Alas, what you got was mockery. Vicious mockery even.

Your lines scraggly, the eyes unevenly placed… upon closer inspection your creation probably could give Frankenstein’s Monster a run for its money. Well… if it would be earning money- somehow. Anyway. It was horrible.

You decided never to touch a pen and, since then, that large white space where the character portrait is supposed to go remained empty.

Here are some ways of how to get some decent, non-cringeworthy artwork in there that looks like your character without paying anything:

This is probably the easiest and most powerful tool out there to get to a character portrait that actually looks like your character.

Heroforge is a platform to make 3D models which you can then order to be printed and used as miniatures in your game, however it’s also a great tool to just get to a great picture of your character without buying anything.

Whip up your model, customize to your heart’s content, pick the colors and then just screenshot the thing and paste it into your character portrait space on the character sheet.

If you are skilled in the arts of gimp you can even customize it a bit further. 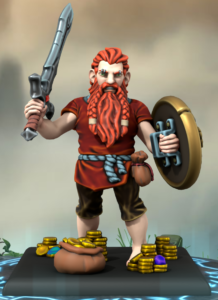 Another way to get to a maybe more realistic (but a lot less customizable) portrait is to use Artbreeder.

Artbreeder is, in essence, an AI tool that was trained on numerous character portraits and either allows you to blend two images into a new one or, even cooler, allows you to generate modifications from an existing image. They call this “children” because the new picture inherits some features from the old one but introduces new elements. So the “child” could have the same nose or similar eyes but differently shaped jawbones or ears, for instance.

To try it out open the Artbreeder website, make an account/click start. Then go to Create (top right) and pick either “characters” for full body images or “portraits” for, well, portraits. In my experience portraits works a LOT better. Characters produces some strange artifacts sometimes and the look is always very anime-like (which may work for you but wasn’t my vision of the characters I had).

Once you click on characters, you can then choose to either compose, upload, or animate. Upload can be fun if you, for instance, find a photo (or artwork) somewhere that already looks a bit like your character – but often compose is actually good enough.

Feel free to experiment a bit, it’s a lot of fun. If you find something you like, click on the portrait and continue down the journey towards your ideal character headshot.

One drawback with Artbreeder however, is that it’s really mostly built for human faces … getting your dwarf, elf or even dragonborn out of it is very tricky. 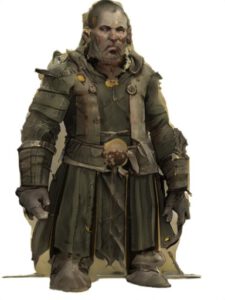 Well, the last one here is really not very creative at all – but sometimes the perfect (or close enough) representation of your character is already out there somewhere. Next to Google Image Search, Pinterest, and other digital art platforms are great sources to browse (probably best to do this at home though, who knows what content people put on there).

Now in this last category is where the cosplayers or LARPers among you probably feel right at home. You can of course just buy a few cheap items from your local dollar store, AliExpress, wish or some other place that carries weird and wonderful things and represent your character yourself! All you need is a smartphone (or a decent camera– but really, a smartphone will do for this) and some time to put it all together.

If you want to illustatify (yes, I invented that word just now) you photo– meaning make it look like an illustration, not a snapshot — you can run it through something like this.